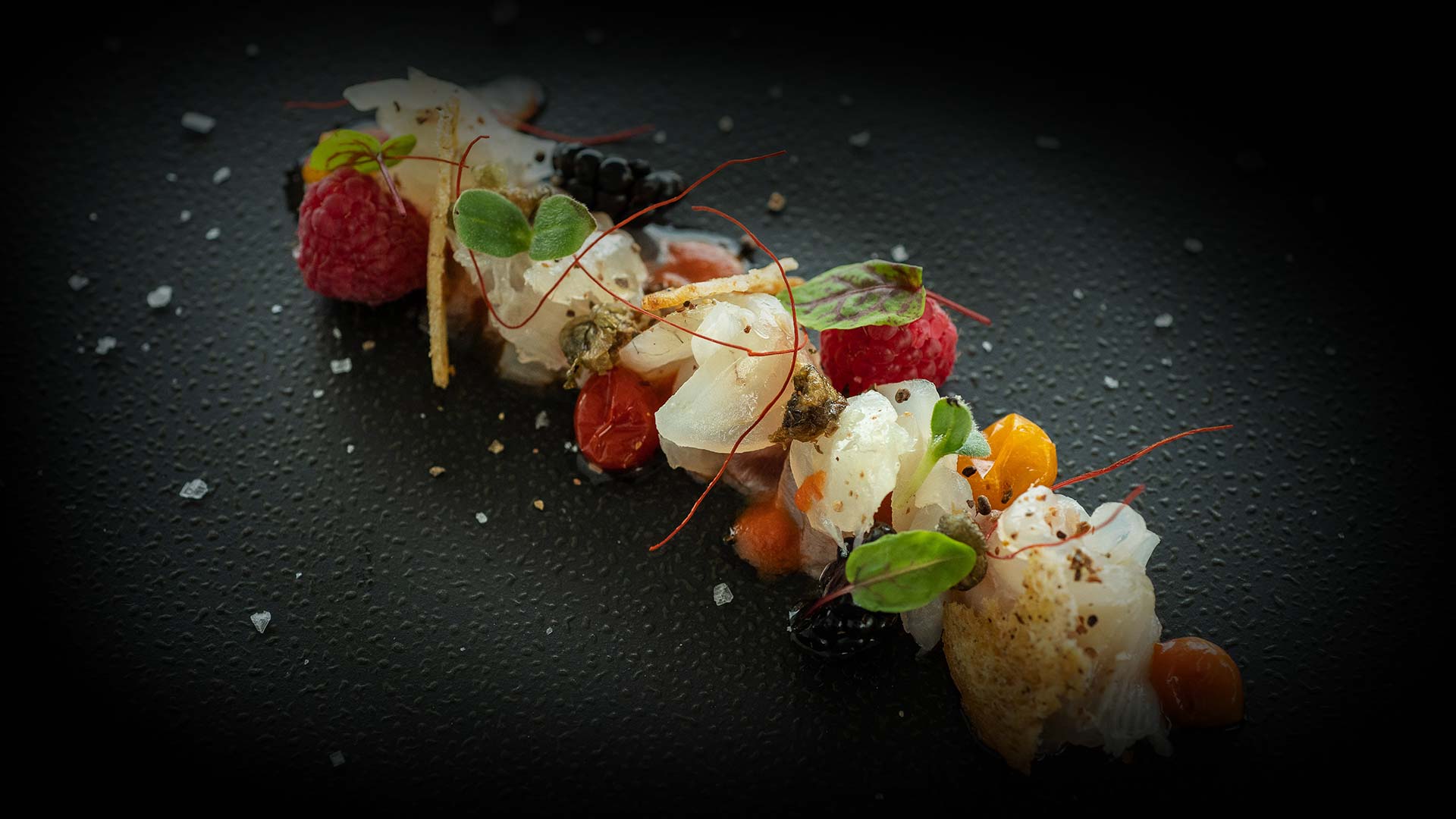 Incanto and
his brigade

The kitchen of the Incanto restaurant is run by the expert brigade led by chef Salvatore Barbara. Individuals of great experience, often developed in the various starred kitchens of the peninsula, driven by a shared passion for traditional recipes and local ingredients

Born in 1974 in Trapani, Salvatore was trained first at the Hotel Institute of his city and then at the Institut Paul Bocuse, in France. Working in the kitchen since he was 16, at 21 he started traveling the world with the Club Méditerranée: Greece, France, Guadalupe, Martinique, Haiti, New Caledonia, Singapore, Indonesia, Japan, Maldives, America and various experiences on cruise ships. He finally stops, returning to Sicily, for the opening of the Kempinski of Mazara del Vallo (TP) in 2005 and to the Rocco Forte di Sciacca (AG) in 2009. But soon he starts traveling again and returns abroad, this time to the east, in Azerbaijan, Russia and Lithuania. His career is dotted with five-star hotels and he could not miss the opening of the Ortea Palace where he started in April 2018

Born in 1985 in Caltanissetta. Resident in the village of Santa Caterina Villarmosa, he graduated from the hotel institute of Enna and the desire to learn and to expand his borders, not only geographically, led him to decide to move to Piedmont for 9 years. Here he works on the splendid Lake Orta at the San Rocco hotel magic theater restaurant. He continues his lake adventure by working for a consortium of group events for important events such as Miss Italia, Sanremo Festival and collaborating with starred chefs including the Chef of Villa Crespi Cannavacciolo. He returns to Sicily where he meets the chef Christian Busca who welcomes him to his brigade at the San Pietro hotel in Taormina, promoting him immediately from the sous chef to the Tout Va restaurant in Taormina with the hotel company JSH, then moving to the Donnalucata resort and to the Picciolo Etna Golf. Resort. In 2017 he arrives in Syracuse at the Ortea Palace

Born in 1986, born in Aversa, in the province of Caserta, Giuseppe grew up doing various jobs, chance led him to become a pastry chef apprentice, working with a great master. After 18 years at his side, he received the proposal to work in a hotel in Denmark, in Copenhagen. Intern at “Noma”, perhaps the most famous restaurant in the world, he begins to move and specialize. Back to Sicily, this time at the Therasia Resort Sea & Spa, in Vulcano, in the Aeolian islands. He therefore attended specialization courses at the Boscolo Etoile Academy. After meeting a Sicilian, he falls in love, gets married and decides to stay in Sicily, in Giardini Naxos, thus joining the Russottfinance S.p.A. team, which leads him to work at the Ortea Palace in Syracuse.

Born in 1990 in Siracusa, after graduation he decides to attend a professional cooking school, the Chef Academy of Terni. He starts off on the right footing by working in nearby Viterbo, in the La Parolina di Iside restaurant, in Trevinano (VT), alongside the great chef Iside De Cesare. From here he moves to Piedmont, to Villa Crespi, at Antonino Cannavacciuolo’s restaurant. Returning to the heart of Italy, he arrives at the Metrò (1 Michelin star) in San Salvo Marina, in Abruzzo. In 2018 he finally arrives to the Ortea Palace.

Born in 1979, a self-described “DOC Siracusano”, he started working at the “Per Bacco” Perfectionist Restaurant, with the role of commis waiter. The contact with international customers intrigues him thus increasing his interest in this job. He was called with the motivation to improve the experience of the guests at the Regina Lucia Restaurant, which then became the recommendation of the Michelin Guide in Syracuse, in 2013; starting with the launch of the Dolce & Gabbana advertising campaign “Dolce” and then continuing as Restaurant Manager, taking care of other illustrious events such as that for Ferrari Automobili, for the International Higher Institute of Criminal Sciences, Panerai and others. Former AIS sommelier and subsequently employed in other departments, in 2019 he starts working in the Ortea Palace as Maître & Sommelier of the Incanto gourmet and panoramic restaurant, located on the top floor of the hotel.

Born in 1985, in Giardini Naxos. His work came to be out of fun and because of the need for young people to finance themselves. At 15, his career has a 5-start beginning: at the Marriott in Giardini Naxos, today the RG Naxos Hotel, later at the Grand Hotel Mazzarò Sea Palace and at the Grand Hotel Atlantis Bay for seven years. He continues his work experience in Palermo at the Grand Hotel Villa Igea and subsequently reaches Tuscany, in Florence at the Brunelleschi hotel as Head Bartender. He leaves for London, where he first works at the Hilton, but falls in love with Corinthia London. Here he works as a bartender at The Northall Bar, becoming over time and in recognition of his merits, Senior bartender. He has the honor of making cocktails for famous and illustrious people, such as David Beckham, Matt Damon and Will.I.am to name a few. In 2018 he returned from the United Kingdom to work in Ortea Palace.

Give an Experience as a Gift

write to us and buy a voucher to give to anyone you want, to live a completely new gourmet experience.

GIVE A VOUCHER GIFT